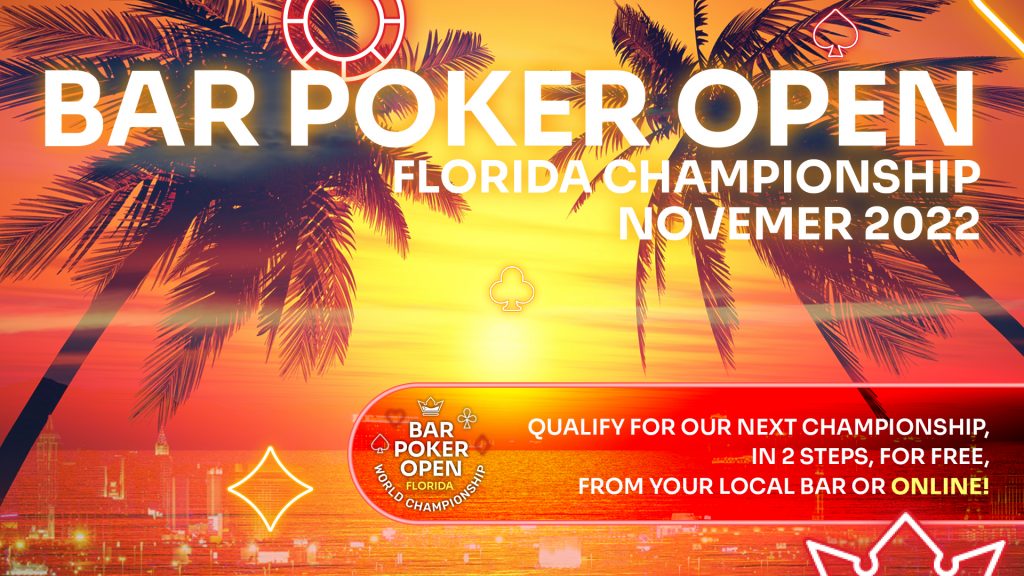 If you can believe it, for the first time in 3 years, we are proud to announce that the 2022 – 2023 Season Will have TWO upcoming Championships to play for!    In even better news, we will be playing in an entirely new destination THIS NOVEMBER… FLORIDA!

The first half of the year, players will have a choice to use their seat or package for either FLORIDA IN 2022 or VEGAS in 2023!

Every week, we will give out over $8,000 in seats and prizes, and all you need to participate is a single Token!
Just show up to your local bar or restaurant hosting “BPO Qualifiers”, finish Top 3, and you’re able to play for $7,000+ in prizes.  Every week, these prizes include A Full Championship Vacation Package and BPO Championship Seats.   More than $500,000 in annual championship seats + over 150 Travel Packages are anticipated to be given out this year!

STEP 2 CHAMPIONSHIP QUALIFIERS
Every Sunday we will award championship seats and a full travel package to attend our upcoming championship!

2nd Half: October 23, 2022 – May 7th, 2022
“2022 Vegas World Championship Qualifiers”
Second half of the year, the focus is entirely on the World’s Largest Bar Poker Championship! In no other place on the planet can you play for such a massive cash prize against ONLY Bar Poker Qualifiers so all qualifiers focus solely on this event!

The Super League 12 Championship Will Award Full Florida Packages to the Top 5 Players
1st Place will win a Day 2 “bye” into the 2022 Florida Championship!

“2022 Vegas World Championship Qualifiers”
Second half of the year, the focus is entirely on the VEGAS World Championship!  During this period,  Players will be ranked within their league and/or within the online league “Bar League PRO” to earn invites to VEGAS 2023!  These invites can be used to buy-in to the Vegas 2023 event.

The Super League 13 Championship Will Award Full Vegas Packages to the Top 5 Players
1st Place will win a Day 2 “bye” into the 2023 VEGAS Championship!

Where?
When you finish Top 3 at a local bar, or online, you are awarded with a token. You will utilize this token to play in the weekly “Step 2: 2022/23 Championship Qualifier”.

What Do You Win?
First Place is a Full Choice Travel Package to either Florida 2022 or Vegas 2023

What If I Win More Than 1 Seat?
During the first half of the year, players can win two seats in order to use one in each championship. However, players cannot win more than 1 Seat into Each Championship and there is no cash out policy. Each additional seat is an entry or rebuy into the “Masters Tournament” held prior to each championship!

You are also welcome to hold on to your tokens for many of the other online events that cost a token (or multiple tokens) to participate.

The benefits to winning multiple seats are displayed in your profile and also listed below here:

1 SEAT
You win your Choice of Championship! Either the 2022 FLORIDA Championship or the  2023 VEGAS Championship.  Either one will certainly be one of the Largest Bar Poker Championships in America!

2 SEATS
You win a seat into the other championship (that was not your first choice).
You can also hold onto this seat for the Vegas Masters Tournament if you do not with to join is in Florida.

3+ SEATS – “MASTER’S TOURNAMENT”
You win a seat into the FLORIDA Master’s Tournament!
This incredible tournament will be for a DAY 2 SEAT into the FLORIDA Championship!  You will get an average stack of 250,000, be immediately in the money on day 2, and get a bye past 90% of the field to play for the massive payout!

Masters Tournament
Once players have won 3 seats during the time period of July 10, 2022 – October , the 3rd seat and beyond are converted into “Masters Tickets”. These masters tickets become buy-ins/rebuys into the Online Masters Tournament on October 13, 2018.

In this event, you will play against a very small field of players who have also achieved 3+ seats for a seat into Day 2 of the East Coast Championship!

More details in regards to the dates, the destination, and the hotel booking information will be announced very shortly!